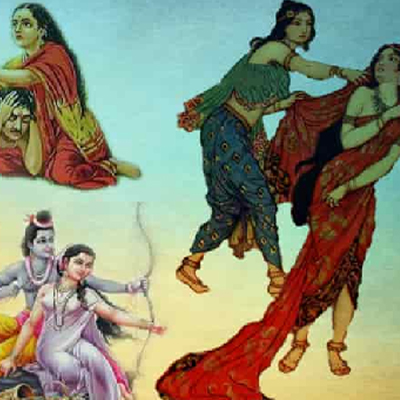 People in India and outside, who are familiar with the epics like the Mahabharata and the Ramayana, know about female protagonists such as Sita, Draupadi, Kunti, and so on. These women have been put on pedestals of honour, fortitude and what is regarded as ‘ideal womanhood’. But contemporary writers and creative performers are reading in between the lines and bringing out certain nuances in their characters that make them more human and more accessible.

Another refreshing aspect of this new look at the ancient scripts is that writers are training their literary lens at ‘lesser’ women characters, who have been otherwise overshadowed by the heroines.

Amish Tripathi, the writer of bestsellers including the Meluha trilogy that focuses on Shiva, points out, “Our epics are not one book, rather, a collection of books, written by different people at different times, and so sometimes values prevalent in the time are reflected in the portrayal of women characters.” Earlier, he says, women were not portrayed as subservient, which happened later for various reasons. “The further one goes back in time, the more one finds that women were strong feminists,” he articulates. For instance, he shares, “Parvati (Shiva’s consort) is no pushover. She has a mind of her own; she takes her own decisions and follows them. For example, she decides to go to her father’s ‘daksha yagya’ uninvited even though Shiva asks her not to.”

From a Male perspective

An accomplished Indian classical and contemporary dancer and choreographer, Anita Ratnan is known for “exploring characters in the epics that are at the core of the stories”. She says, “Can the Ramayana be written without Manthara being portrayed as a reviled figure? As adviser to Kaikeyi, the second wife of King Dasaratha, she is seen as someone who masterminded Rama’s exile. What was her motive in doing so, if it was true?

As a solo performer and choreographer of A Million Sitas, she has taken on the characters of Mandodari, Ravana’s wife ; Surpanakha, his sister, who is portrayed as ‘demoness’ though she was a very beautiful woman with a mind of her own ; Manthara and, of course, Sita. “Some of these women,” she feels, “have been either ignored or portrayed from a male point of view.” Not just the Ramayana, but the Mahabharata, too, has had the creatives asking questions for decades now.

Today’s generation of writers, who are looking critically at the epics, seem to take forward these ideas. Pune-based author Kavita Kane’s best-selling debut book, Karna’s Wife: The Outcast’s Queen, is on Uruvi, the wife of Karna, the unsung hero of the Mahabharata. She is hardly visible in the magnum opus though she was an accomplished Kshatriya princess. She fell in love with Karna and stood by him in his times of distress, when he was ridiculed for his ‘low birth’.

Besides this, Kavita has written on other lesser characters of the epics, like Urmila, Sita’s sister and Lakshman’s wife who was left behind when he opted to go to exile with his elder brother and sister-in-law Sita. “Lakshman is portrayed as a dutiful brother and protector of Sita in the jungles. Urmila was Sita’s sister, equally talented and beautiful. What did she do in those 14 long years in her husband’s absence? How did she take it when he left her
behind as a new bride? Wasn’t he a husband to her, too?” she asks. Urmila, in fact, became a scholar and retired into ‘private exile’.

Then there’s Menaka’s Choice, penned by Kavita, that portrays the celestial dancer, who is always seen as the one to break the tapasya (long periods of meditation) of the sages, and hence almost a ‘vamp’. “Look beyond Menaka’s beautiful face — behind it there is enormous sadness, disappointment, guilt and anger…but she moves on regardless with love and hope,” says the writer.

Bengaluru girl Samhita Arni, who wrote The Mahabharata – A Child’s View at the age of 11, did not lose her interest in the epics as she grew up because she believes that “they should be retold by every generation … (to) reflect that generation’s anxieties and issues”. Her Sita’s Ramayana, a graphic novel, went on to become an international bestseller.

And what about the rakshashis, the demonesses as painted in the epics by writers? How did they live after the defeat? “Those are exactly the kind of the in-between characters I am interested in,” she says. Samhita’s last book, The Missing Queen is “a political story” about Sita in exile once again after she returns to Ayodhya. It has many strong female characters.

Well aware that all readers would not take kindly to her interpretation, she calls it a “speculative mythological feminist thriller”. Surely, with writers like these, enthusiasts of epics are definitely in for exciting times, particularly with such new ways of looking at stories handed down over the centuries.