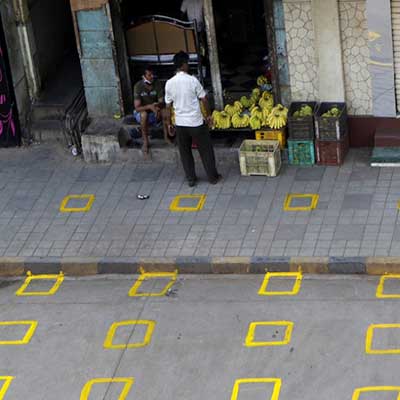 The world is in the grip of COVID-19 pandemic which has hit every nation irrespective of geography or economic status. The extraordinary spread of the deadly infection has wreaked havoc on human and economic health. Outside China, with Iran being an exception, most of the wealthiest countries have suffered the most with Italy, the US, Spain, France emerging as the epicenters of global grief. But that doesn’t mean that the rest of the less privileged world is out of this mess.

In Africa and South Asia, the two most vulnerable parts of the world, the number of coronavirus cases is rapidly increasing despite low testing hiding the real extent of the spread.

India and Pakistan, one of the most populated countries, are struggling to slow down the infection. A community spread in thousands of cramped cities in these two countries could lead to catastrophic consequences that will collapse their fragile healthcare infrastructure and economy.

India was already reeling under the impact of an economic slowdown when coronavirus arrived at its shores. The 21-day lockdown announced by Prime Minister Narendra Modi on March 24 not only has dashed any hopes of revival but also plunged the economy into a vortex of despair. But probably the lockdown was the only option available with the government to contain this disease.

The lockdown might help in breaking the spread chain but it has triggered a chain reaction for economic collapse with the government finding itself in a classic Catch-22 situation where it has to battle the virus and deal with the economic consequences of its harsh measures — it’s a double-edged sword, saving the people from disease or hunger.

A community spread will lead to a full-scale health emergency with a possibility of thousands of deaths and if it is controlled by lockdown then this will surely bring the economy to a complete halt leading to mass unemployment, drop in incomes, starvation possibly ending up in anarchy.

We are already witnessing a fall in employment level and mass migration of labour from urban to rural areas. The government is trying hard and, accordingly, they had taken steps to minimise the economic damage. The measures are both fiscal and monetary in nature.

In other South Asian countries, similar steps have been taken by the authorities like a relief package of Rs. 1.2 trillion by the Pakistani government. Pakistan Prime Minister Imran Khan has already warned that the lockdown in his country will be disastrous for millions of poor in his country.  The Afghanistan government had announced the release of $25 million to meet the immediate expenses, the Bangladeshi government has allocated Taka 2.5 billion (about US$29 million) to the Health Services Division to fund the COVID-19 preparedness and response plan. Additionally, monetary measures have also been taken to cushion the blow to the economy.

Yes, this maybe not the right time to start thinking in terms of economic cost but we have to face this harsh reality. These are extraordinary times and which will require extraordinary solutions. For the time being, governments can throw caution to the wind. They should not follow the textbook prescription as there are no precedents to deal with a crisis of this magnitude.

It will be difficult for developing countries like India to match a similar package but surely we have to increase the size of our relief package and make it at least 5 percent of our GDP.

The nature of our economy is markedly different from developed economies, therefore, the solution should also be different in nature but one thing is sure that the impact of this crisis will be more than US$22 billion.

The policymakers must provide emergency assistance to workers especially those who are in the construction and the manufacturing sector, small firms, and MSMEs.

This pandemic will have a deep and strong negative impact on the overall economy in the short run, and on some sectors like construction, real estate, automobile, travel, and tourism, etc. the impact could remain for a long duration. As Ruchir Sharma of Morgan Stanley has suggested in his recent article in The Times of India that there is no one-size-fits-all response to a global pandemic.

South Asian countries have a fragile economic and social fabric compared to developed countries. We cannot make the same choices as the developed nations. We have to make intelligent choices and more targeted decisions in the coming days. We may not have the luxury to splurge like developed countries but it does not mean that we should be adhering to fiscal profligacy in these trying times. The choice what governments have to make is between the cost of life and cost to the economy. As a democratic country, we have to choose life over growth rate.

Thankfully, the leadership of South Asia has understood the magnitude of the problem and decided to fight this pandemic together. Prime Minister Modi took the initiative and called upon other leaders from the South Asian region under the banner of SAARC. They have announced a SAARC COVID-19 Emergency Fund where all members will contribute voluntarily. India has already pledged $10 million to the fund and, as of 23 March 2020, this fund had accumulated US$18.8 million with the pool of contributions from seven member countries except Pakistan.

The biggest challenge for governments in South Asia is to fight this pandemic like a first-world country but with the limited resources of a third-world country. This really is going to be a true test of political and administrative governance in South Asia.