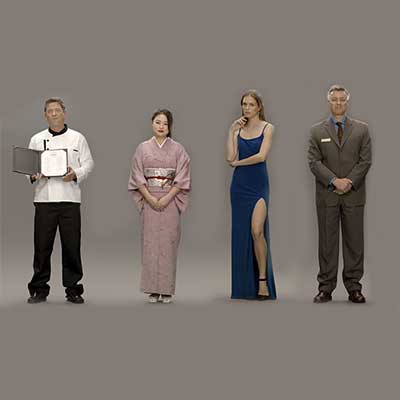 NEONs have the ability to show emotions, converse and respond intelligently, and Pranav Mistry believes they are a new kind of life.

If you thought artificial intelligence (AI) and the AI powered assistants are all about telling you what the weather is like or play music for you, think again. NEON, our first Artificial Human, has been unveiled at the Consumer Electronics Show 2020 (CES 2020 to most of us) in Las Vegas. NEONs, the first venture of STAR Labs which is an independent future factory of Samsung, have been computationally created to look and behave like a real human. They have the ability to show emotions, converse and respond intelligently. No longer are artificial humans limited to the world of sci-fi movies.

“NEON is like a new kind of life. There are millions of species on our planet and we hope to add one more. NEONs will be our friends, collaborators, and companions, continually learning, evolving, and forming memories from their interactions,” says Pranav Mistry, CEO, STAR Labs. NEONs can learn new skills and form memories from experiences too. So much so that you don’t call out to them as “Hey, Neon” or “Ok, Neon”, but they will have names like us.

The company says that each NEON is powered by a proprietary technology platform called CORE R3. The R3 stands for Reality, Realtime and Responsive. They insist that the CORE R3 leapfrogs in the domains of Behavioral Neural Networks, Evolutionary Generative Intelligence and Computational Reality. The inspirations come from the complexities of nature and there is extensive training about how humans look, behave and interact. The CORE R3 is used to computationally create lifelike reality, which in this case are the NEON artificial humans.

“With latency of less than a few milliseconds, CORE R3 makes it possible for NEONs to react and respond in real-time. CORE R3 can also connect to other domain-specific and value-added services. SPECTRA (another technology platform), still in development stage, will complement CORE R3 with the spectrum of Intelligence, Learning, Emotions, and Memory, thus making NEONs fully immersional,” says STAR Labs. The SPECTRA platform will be detailed at the NEONWORLD 2020 event later this year. How different are NEONs from the AI-powered virtual assistants that you may have used thus far? “NEONs are not AI assistants. NEONs are more like us, an independent but virtual living being, who can show emotions and learn from experiences. Unlike AI assistants, NEONs do not know it all, and they are not an interface to the Internet to ask for weather updates or to play your favorite music. NEONs are more like our friends and companions, with whom you share your experiences and build memories,” say the company’s FAQs for NEONs.

As for the inevitable question about whether NEONs are going to replace humans, STAR Labs insists that it is actually about making us more human. “They are our companions, friends and collaborators. We truly believe NEONs will integrate with our world and serve as new links to a better future, a world where humans are humans and machines are humane,” says the company.

As for the privacy issue, STAR Labs says that all interactions and conversations between a human and their NEON will remain private and only the owner will have access to those interactions. They also say that a NEON will never share any user’s data without explicitly asking for permissions.