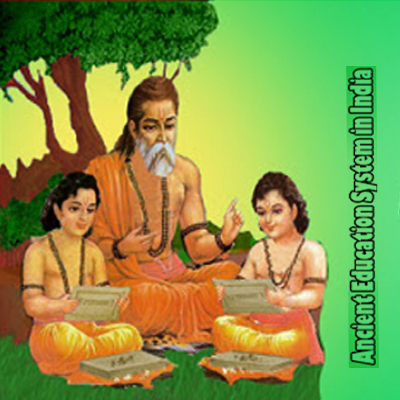 In the olden days, there was no formal education in India. Much later, two systems of education emerged – Vedic and Buddhist. The Vedic system revolved around the Vedas, Vedangas , Darshans, Puranas and Upanishads, while the Buddhist system preached the thoughts of the major Buddhist schools. Sanskrit was the language of Vedic education system and Pali was language of the Buddhist education system. Before the arrival of British rule, they served as South Asia’s primary educational system.

The Education System of the ancient period in India had unique qualities which were not found in the ancient education system of any other country in the world. Gurukul (Ashram) (Sanskrit: गुरुकुल, romanized: Gurukula ) was a type of school in ancient India, residential in nature, with pupils living in proximity to the teacher (Guru). In a Gurukul, students would reside together as equals, irrespective of their social standing, learn from the Guru and distribute work amongst themselves to help the Guru in his day-to-day life. At the end of their studies, pupils would be ready to offer Gurudakshina (one time fees) to the Guru. The Gurudakshina is a traditional gesture of acknowledgment, respect and gratitude.

During the Vedic period, there was also provision for Music, Dancing, Housekeeping and Arts Training for women. Vocational education was also available free of cost in this period. Methods of learning, period of study and types of teachers were unique in ancient India.

Few Advantages of Ancient Gurukul System:
• It focused on the all- round development of a student like science, physical, mental abilities.
• Interaction between students and teachers was more compared to the present day system.
• Class rooms were inside forests, which helped students to keep towards nature, which kept them very healthy.

2. Control of Mind – Liberation is possible only through the control of the mind. The ancient Indian education was even more developed by the Upanishads. While in the field of religion, the Upanishads were more introvert and monistic, they continued the tradition of the Vedas.

3. Women Education – In ancient India, women were given equal right to education and teaching. Education of girls were looked after in the same way as that of the boys and many amongst them gained highest education. These were called ’Brahman Vadini’and achieved the status of ‘Rishika’. Some of the women were regarded as ‘Devis’.

Summary – Knowledge was passed on verbally from one generation to another in ancient India. Education involved three basic processes, one, which included ‘Sravana’(stage of acquiring knowledge of ‘Shrutis’ by listening). Two, ‘Manana’ (meaning pupils to think, analyze what they hear, assimilate the lessons taught by their teacher and derive their own inferences,) and three ‘Nidhyasana (meaning comprehension of truth and apply/ use it into real life).