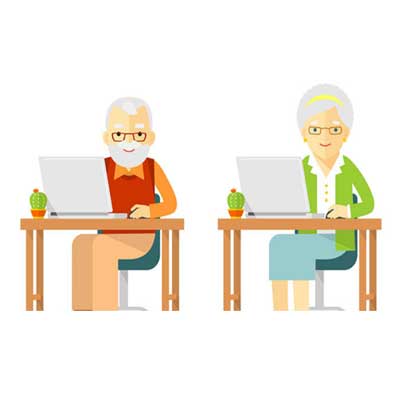 It used to be that most people died soon after retirement at 65. Those days are gone, and they aren’t likely to come back anytime soon.

PROS for hiring older employees are as follows:

• They are usually able (and willing) to mentor younger, less-experienced employees.

• They can take on part-time or seasonal work. In fact, they often prefer it.

• They are reliable and have a strong work ethic.

• Older employees have a serious commitment to work, and they are loyal.

• Many times, they already have established, long-term networks of clients and contacts

• Young employees can be careless. Older workers, who are dedicated to doing the best possible job, are often the ones who find and correct mistakes. That kind of person can potentially save your business a great deal of money along the way.

• Punctuality, honesty, and an insistence on doing things right even if it means staying late are old-fashioned virtues … and older employees often have them in full measure. They take pride in what they do, and they can be extremely hard working.

• Training has as much to do with a willingness to listen and change direction as it does with having good hearing. Someone who is older may actually be easier to train than someone who is younger, because older employees are less likely to need repeated reminders. Once they’ve got something, they don’t usually just ignore it. Younger employees — impatient, ambitious, and not really team players yet — may do just that. Youth does not mean compliance. Sometimes, it means rebellion.

• Older employees are often have strong organizational skills. This is significant, because businesses lose about a million hours of work each year because of disorganization within the workplace.

• Most older people have developed communication skills and tact. They aren’t seeing workplace politics for the first time, and they often know exactly how to deal with it.

• They aren’t shy about sharing what they know, they tend to know a great deal, and they have the maturity to put it all into perspective. Sometimes younger employees are intimidated by the mere fact of being within an organization. Every company needs people who will speak up when it counts, but sometimes that’s easier to do for older employees than it is for younger ones. It’s like a 50-year-old taking a class from a 30-year-old professor.
The dynamic is totally different than it would be for someone who is 18 years old and on campus for the first time. The older student will still be respectful, but will also have the confidence that comes from life experience.

• Their salary and benefits may be less expensive than those for someone who is younger. If they own their own home and have insurance from some other source, or even a pension from another company, they can focus more on what they want to do and less on just covering their living costs. Older employees may not be there for the money as much as
they are for the satisfaction and involvement of still being productive and valued. If they have debts, they are very motivated to make sure they take home that all-important paycheck.

• It sets a good example. Employees are smart enough to know when a company respects all its employees, regardless of age, and older employees are often excellent models who are more than happy to mentor and train. And it is just smart business to teach the lesson that your business values diversity, including the diversity that comes from age. At some point, most employees will get older themselves. It’s good for them to know they work for a
company that values them regardless of age.

• Few companies haven’t thought far enough into the future. They have been so busy cutting costs and exporting jobs offshore in order to stay in business that they’ve neglected training new talent.

• An older employee is someone who has verifiable history. That’s a tremendous advantage, but they are also often more motivated than their younger counterparts. One expert said their motivation score is higher (at 78.4 percent) than the 71.2 percent for someone between the ages of 18 and 29. CONS for hiring older employees are as follows:

• Older employees might bet set in their ways and sometimes are not as adept at new technology as their younger counterparts. They may need additional training, and they may lack flexibility.

• They might be old enough to have one or more chronic diseases, which makes them more expensive when it comes to medical care and insurance.

• They prefer flexible hours, but not all businesses can give them this benefit.

• An older employee may have very real physical limitations that require accommodation. If the employee is on Medicare, there are earning limitations.

• Older employees do value relationships more; there are benefits to this, but it is also true that relationships can affect efficiency and productivity.

Research has shown that, far from being a burden, older employees actually miss fewer days than younger ones. According to SHRM, their turnover rate is less than the one for younger ones, too. That matters, considering that turnover costs are about a third of an employee’s annual salary. And many of them are healthier than the last generation. Many older employees are obviously still healthy and vital.

It’s important to hire the right person for the job, but the right person might well be someone older. If that’s the case for your own business, then you should give older potential employees serious consideration. It’ll keep you on the right side of the law — always a good idea — and if you select the right people, they will make your company stronger and better.

And isn’t that the thing that really counts?