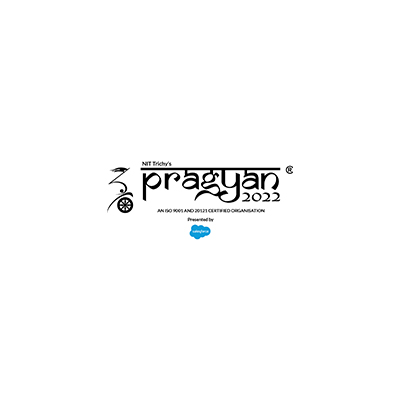 Pragyan is the ISO 9001 AND 20121 certified annual International Techno-Managerial fest of NIT Trichy. It is one of the biggest festivals of its kind in the country, which hosts and showcases the talent of students from various colleges across the nation, since its inception in 2005. Pragyan is renowned for the diverse experiences and opportunities it offers for technology and management enthusiasts.

Over the past 10 months, Pragyan has conducted a wide array of events to share the wonders of technology with other admirers as well as share its benefits with the less fortunate sections of society.

Cosmic Canvas, a poster-making contest, challenged the creative skills of participants. Space Labyrinth (a puzzle-solving contest) and Space Sherlocked (a mystery-solving contest) put space enthusiasts’ knowledge of the cosmos to the test. Spacewalks and Star Talks, a comic strip about the lifespan of stars, was released to promote interest around space week.

Furthermore, Pragyan in collaboration with Nakshatra, organised UFOs: Unverified and False Opinions on Space, an interactive workshop targeting the misconceptions and half-truths about the natural phenomena occurring in space. Attendees recognised the amount of misinformation circulating on online platforms and were taught to identify facts from myths.

Additionally, a panel discussion, with the objective of determining “If the Outer Space Treaty of 1967 is still valid in the current era of space exploration” was held. It was spearheaded by 4 experts who had a civil discussion on the pros, cons and what to expect in the near future.

Pragyan Blog was kickstarted back into action following the end of Pragyan ’21. Surviving the zombie apocalypse, entertaining the possibility of a real-life Iron Man, exploring the realms of robotics and AI, understanding the science behind music, assessing current economic reforms, questioning the extent of our privacy, learning to live with oneself; the Pragyan Blog remains the one-stop destination for science, technology and management related content.

Ingenium, the national-level technical competition, was revitalised to put the finest minds from numerous colleges across the country to a battle for the most innovative ideas, creations and inventions. The competition encompassed the entire experience of realising a vision, ‘one step at a time.

Sangam, in association with SCIEnT, held its flagship Hardware Hackathon for all the technophiles of NIT, Trichy. With themes revolving around Energy, Healthcare, Agriculture and Defence technology, teams were put to the task of coming up with innovations that break all previously known barriers. Sangam, in partnership with 180DC NIT Trichy, also organised a Case Study Competition for all budding business enthusiasts. The competition provided a platform for students to try their luck in the versatile field of business management.

To increase the reach of the festival, Pragyan held multiple outreach events. The Logo Quiz tested participants’ nimble minds and pictographic memory. Pragyan also held a Scavenger Hunt, which had teams competing to solve clues at the earliest and reveal the final secret. For the special occasion of Valentine’s day, Pragyan released Love is in the AIr, a comic strip highlighting a few unique conversation starters.

GyaanE, an interactive event was held for the students of VI-XII at an orphanage of Bhopal (Children’s village), which was conducted by the social responsibility wing of Pragyan. The event consisted of sessions covering topics such as Cybercrime, Art & Crafts, and Social Skills; where the young minds came across guest lectures, activities and interactive sessions that proved very useful to them. The event was wrapped up with a valuable career guidance session.

Canvas for Change, is an exclusive poster contest for Students from LKG to 10th Grade targeting ‘Awareness through Art’. Pragyan, in collaboration with the Fine Arts Club of NITT, organised this event to increase awareness about global issues. This event stood apart from others as it gave a platform for participants to use their creativity to express real-world issues.

Pragyan ’22 is scheduled to happen from 18th to 20th March. This year, the festival aims to evolve into its best version yet, sticking true to its tagline of ‘Let’s Celebrate Technology’. With the fest being conducted through a hybrid model after 2 years, be ready to witness the wide plethora of events, workshops, guest lectures, panel discussions and so much more.

There are various events planned for each of the 8 unique clusters. The different clusters for this edition of Pragyan are Concreate, Bytehoc, Manigma, Conception, Roborex, Pandora’s Box, Phronesis and EWitts. A few of the mega-events are TownTrace, Code Venatic, Attack on Robots, NoContact, Simdroid, M-Decoder and Biz Quiz.

This year’s line-up of guest lectures aims to cover broad topics such as Clean Water Development, Space Laws, Internal Medicine, Electron Devices and Nanoelectronics. With lecturers coming from various walks of life, be sure to catch these transformative speeches.

The Pragyan Podcast has released its first episode titled ‘Women, Work and Feminism’, in which the hosts explore the difficulties faced by women at their workplaces and the various factors that hold them back. With more intriguing episodes lined up, listeners are in for a ride.

The Pragyan ’22 Infotainment Programmes aim to ensure that this will be one of the most memorable editions of Pragyan. This year, Pragyan plans to host beautiful light paintings, an astonishing fire performance and the innovative LED POI by Kupava. A jaw-dropping performance by Laser Show India is also planned along with a comedy night by the acclaimed comedian Nishant Suri, to tie up the fest.

The finals of Sangam and Ingenium will be conducted during Pragyan, which will see the top intellectuals of the country presenting their case studies in front of a distinguished panel of judges.

Crossfire, the annual Panel Discussion, seeks to address the future of Cryptocurrencies and NFTs in India. Cryptocurrencies, powered by encryption algorithms, have established themselves as an alternative form of payment due to their accompanying ease of transaction and anonymity. While some countries have entirely banned cryptocurrencies, some have partially tried to regulate their flow in the economy. The magnitude of global stature that cryptocurrencies and NFTS may attain is anyone’s guess. Therefore, it is imperative to discuss how they may evolve and impact the future, especially in populous countries like India. Stay tuned to Crossfire ’22 to find out the answers to all your queries.

Last but not the least, Pragyan also plans to organise Catalyst, an interactive session with a government school to help teach the basics of Science, Maths and English to the students. And to top it off, a session in Origami is also planned to ensure the kids leave with a smile on their faces.