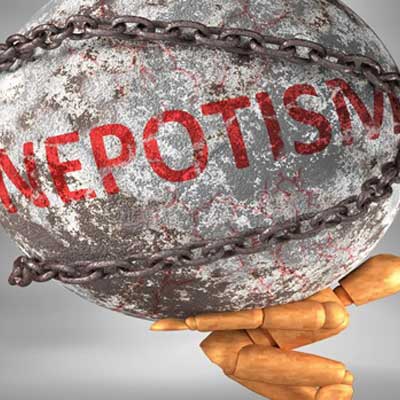 Workers who are the most innovative or productive or those who possess visionary leadership are inevitably propelled to the top. That’s the image many of us have of the workplace. In reality, the practice of favoring and promoting relatives or paramours, more commonly known as nepotism, is widely practiced in companies large and small across the country.

The dangers of nepotism to your company shouldn’t be overlooked. It’s not only wise to promote anti-nepotism policies but also to regularly monitor your staff to ensure that such relationships haven’t developed.

Disruption of the workforce

One of the chief complaints in a company that operates through nepotism is the patent lack of fairness. Perceived favoritism of a relative can cause dissatisfaction among workers and lower morale. Employees may have less incentive to perform their responsibilities diligently and proficiently if they feel that the path to promotion is undermined by nepotism. Indeed, a company employing such tactics may find its more valuable employees seeking new employment where their talent is better recognized. At a minimum, workers will likely complain and become embittered and less productive in the face of blatant nepotism.

My friend, a writer for a leading newspaper, described a typical workplace scenario involving nepotism at a newspaper for which she used to work. A young, inexperienced colleague was hired in her department, and she actually spent several months helping him adjust to his role at the paper. Soon after, the individual was promoted to become her boss. Only then did she discover that he was actually an editor’s nephew. Given the nephew’s effortless and unwarranted promotion, she ended up leaving the paper.

Very few laws regulate nepotism at either the state or central level. Nevertheless, the consequences of nepotism may increase your risk of being sued for discrimination or hostile work environment if an MNC. For instance, personal relationships and fraternization between co-workers often lead to tempestuous breakups and emotional trauma at the office. One of the parties may accuse the other of sexual harassment or of creating a hostile work environment — especially if one of the parties is a supervisor.

Ultimately, you may be dragged into the conflict if one of the aggrieved individuals decides to file a lawsuit against the company. And of course, even if the conflict never escalates to legal action, the lover’s quarrel may permanently disrupt the work environment for those involved as well as their co-workers. Those kinds of situations can easily lead to the termination of one or both of the quarrelling individuals.

Nepotism usually leads to an inferior work product. Employees who are rewarded and promoted because of their relationships with management are likely to be underqualified for the positions they are expected to fill. That can lead to an erosion of leadership skills at the senior level of the corporation and also contribute to the demoralization of more deserving candidates.

Many multi-national companies include anti-nepotism and anti-fraternization policies in their employee handbook. Some policies prohibit the hiring of an employee’s relatives under any circumstances, while others only prohibit it if there would be a direct or indirect reporting relationship between the two related individuals. These precautionary policies are sensible and should be used by your company in some form.

Another useful strategy is to require employees to fill out an annual conflict-of-interest form that discloses whether they have initiated or participated in any decisions providing a direct benefit to a relative or person with whom they have a personal relationship.

Don’t let nepotism interfere with your company’s operations and possibly create an environment that is demoralizing to your employees. Whatever approach you take, it’s best to consult with a lawyer to develop appropriate anti-nepotism and anti-fraternization policies. Given the multitude of problems that nepotism can create, it’s wise to steer clear of any type of favoritism.