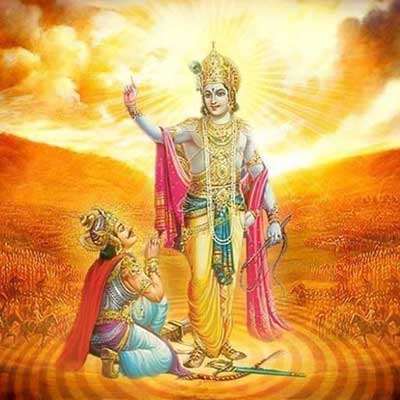 It presents the cousel of Krishna to Arjuna- 2 prominent leaders of the epic of Mahabharata. Mahabharata is the epic of the feud between 2 warring clans- the Pandavas and the Kauravas. Just before the onset of the battle of Kurukshetra, Krishna who is a friend and the charioteer of Arjuna, drives the chariot to the middle of the battlefield, so Arjuna can take stock of his army and his enemies. Seeing his own kinsmen lined up against to fight him, Arjuna is very disturbed with the thought of killing them. Krishna’s discourses are described in the 18 chapters of Bhagwad Gita in which he successfully convinces Arjuna to fight the battle of Kurukshetra.

The Bhagvad Gita has been predominantly studied in the contexts of philosophy, theology and literature. Scholars through out the ages have studied the Gita with great interest. International scholars like Albert Einstein, Ralph Waldo Emerson, Aldous Huxley, Herman Hesse, Carl Jung, Dr.Albert Schweitzer, Henry David Thoreau etc. have quoted the Bhagvad Gita in their writings. Peter Senge, one of the most prominent management thinkers, has quoted the Gita in his famous books, “Fifth Discipline” and “Presence.” Indian thinkers such as Sri Aurobindo, Ramanuja Adi Shankara and even legendary personalities like Mahatma Gandhi & Pandit Jawahal Lal Nehru drew inspiration from this epic text.

Many contemporary leadership topics such as emotional intelligence, situational leadership, character and integrity were already discussed in the Bhagvad Gita thousands of years ago. These topics were discussed in a philosophical context, since management science as we know today did not exist then. It is also intriguing to find other management concepts embedded in the Gita. Thousands of years before Frederick W. Taylor defined work and worker, and Peter F. Drucker defined knowledge and knowledge worker, the topics of work and knowledge were already in the Bhagvad Gita.

The wisdom of Bhagvad Gita contains many leadership lessons that are akin to contemporary leadership theories and
practices. Have culled out the key lessons post my reading and reflection of this magnificent text with my Sanskrit teacher and guide.

Here are the significant ones as food for thought for each one of us trying to make our mark in the Corporate Battlefield.

1. Character is core to effective leadership.
2. Leaders achieve lasting power and glory by exercising compassion and selfless service.
3. Leaders should embrace rather than avoid formidable challenges because they bring out the leaders’ greatest
strengths.
4. Leaders should be resilient in their actions and should not be swayed by pain and pleasure.
5. Effective leaders do not lead by fear or anger.
6. Selfish desires and animosity obscure the purpose of leadership.
7. Leaders need to be aware of the self and the surroundings.
8. Renunciation- the ultimate leadership challenge : Renounce negative thoughts, words and actions ; renounce inequality ; renounce arrogance and ignorance ; renounce indiscipline, dishonesty and laziness.

Likewise, without effective communication skills, leadership cannot become effective. Krishna says, the most important part of communication is to communicate with honesty and with respect toward others. For leaders to be effective, they must be able to motivate their followers when they speak, so they can guide them toward the common vision and goals. Leaders like Mahatma Gandhi, Swami Vivekananda, Kennedy etc. became known as effective leaders mainly because they communicated elegantly at all times. In the business world, we know leaders like Jack Welch, Andy Groves and John Chambers as great communicators. When these leaders communicated to their people in their respective organizations, they were always consistent on the vision and goals they presented.

The discipline of equanimity suggests that we have to keep steady composure at good and bad times. The Bhagvad Gita says that we should not be overtly excited in good times and overtly depressed in bad times. Keeping a composed mindset at all times ,helps us to achieve more peace and happiness in our professional and personal lives.

If we look at the lives of effective leaders, they have demonstrated leadership renunciation. Mother Teresa left her homeland to serve the poor and needy people of India. Albert Schweitzer left a good life in France to serve the poor people in Africa.

Henry Dunant gave up his wealthy business to serve the war victims, and established the Red Cross movement. Nelson
Mandela spent twenty seven years in prison to fight against South African apartheid. The fourteenth Dalai Lama became the messenger of world peace and harmony while remaining in exile away from his homeland Tibet. And there are many more to recount.

Summing up , “You have the right to work only but never to its fruits. Let not the fruits of action be your motive, nor let your attachment to inaction.”